DO YOU WANT A BITE OF MY HAMBURGER? HAHAHA.
Non-vegans, please stop saying this to vegans and vegetarians.

Why?
The number one reason not to offer vegetarians and vegans a bite of your hamburger, is that it’s not funny. It may seem funny to you, but we have heard it seventy thousand times. And it’s less funny each time. So, if you’re one of the people who says stuff like this, and you then complain that vegans are mean, you should know you made us this way. You hardened our hearts.

The second reason, and it’s a close second, is this: We think you make “jokes” (term used loosely) like this to downplay our food choices and deflect your own issues with eating meat. Yeah. We do. And you don’t want us to think that, do you? Then stop giving us reasons to. Shush, and eat your burger without bothering us.

Note: I asked you to choose my punishment for missing a day of posting for VeganMoFo, and you responded. But there was a tie, so I decided to do a few of the things: starting with posting a dumb picture of a (smart) vegan on each VeganMoFo post. Here’s today’s! 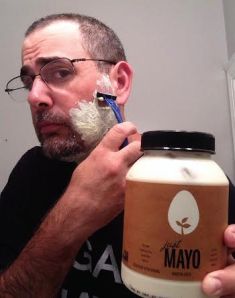