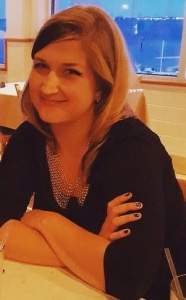 The world is small, and it’s even smaller if you do improv. You see, improv is a cult wherein all members are automatically best friends even if they’ve never really “met.” Ugh, technicalities!

Anyway, my best friend Annie Niehoff runs a really awesome blog, which she interviewed me for after I begged her to do so. (I’ll link to that later so you don’t get distracted.) I figured, since Annie let me type words on her blog, it would only be fair to subject her to my snarky awfulness by interviewing her here. Plus maybe I wanted to get to know her better because I think she’s fantastic. Though, not vegan. Sigh. No one’s perfect.

Why have you decided not to be vegan? Describe your journey to veganism and where you got stalled.
Well, like I mentioned, I grew up in a home that was strictly non-vegan my whole life. I didn’t know any differently. As I got older I met people with different dietary restrictions but it wasn’t until high school when I met people who outwardly chose to have different dietary preferences from the typical non-vegans I knew. I considered being vegan before. I really like raw broccoli, carrots, cauliflower, but in the end I couldn’t say goodbye to butter and eggs. I was vegetarian for a week and pretty much just ate chips and fries. It made me sick and I went back to my old eating habits in days.

If you had to take one step toward becoming vegan, what would it be and why only one?
I think I could eliminate fast food meat. Fast food hamburgers taste like meat sponges and fast food chicken creeeeps me out. But sometimes you just have to look the other way when you are kind of lazy, hungry, and cheap. I’m not saying all non-vegans are this way but I am some of the time.

Why only one step? I guess because you asked me take “one step.” But even so, I think I named two steps. Does cutting out fast food chicken AND beef count as two steps?

Which fad diet or meat-eating celebrity made you want to eat animals?
If Paris Hilton can eat a giant hamburger in a bikini on a car and only get one drop of mustard on her face, then I too can eat meat in the quiet of my own home in whatever attire I please.

Do you ever talk to others about eating animal products? If yes, why so preachy?
I have definitely mentioned to more than one friend that fast food cheeseburgers taste like meat sponges with yellow sodium squares. It’s really gross. I mean, there have been times where I left a McD’s sandwich in the car over-night in the winter, and ate some of it the next day when I found it. It was a desperate and unhealthy time (early twenties, oof).

I generally enjoy cutting people off mid-sentence and telling them my thoughts. Eating animal products is just another way I can do that.

Where do you get your Vitamin K?
We have a box of Special K that sits in the cabinet. I would eat it if there really was nothing left to eat in the house and I was really hungry.

Are there any animals in your life, such as pets or funny neighborhood squirrels? Tell us a story about them.
We just got a new kitty named Tillie. Sometimes she’s a love bug, sometimes she won’t stop running around and play biting me. It can get irritating.

ALSO, my cousins have a family of albino squirrels that live in their backyard. I’ve tried to take pictures but the photos never come out correctly. Elusive albino squirrels.

What do you do for fun besides eating meat and dairy?
Ah, vegans can’t have cheese? Oh man, forgot that. Well, the cheese that is my favorite probably doesn’t have too much real animal products in it anyway so I bet y’all vegans have a nacho cheese substitute that is pretty delish.

Oh and I like to do improv, write sketches, and read fiction and biographies. I am currently enjoying Madmen – just started season 3.

Do you have any upcoming projects you want to plug? Tell us about them.
Yes, in fact I do. I recently launched Work Theory (find us on Facebook) . It’s a website that seeks to understand what makes people happy with what they do at work. It also includes job search tips and a resume writing service. I got to interview the lovely Lisa Rimmert recently and you should definitely go check out her responses!

Make up a question of your own and answer it.
Annie, all this talk about weird beef has got us wondering, who is your favorite beefcake?

While I have many loves, one of my favorite beefcakes is Tom Hiddleston. Also could you imagine being in a love triangle with Tom Hiddleston and Idris Elba? I don’t know why I’m really stuck on Avengers hunks right now.