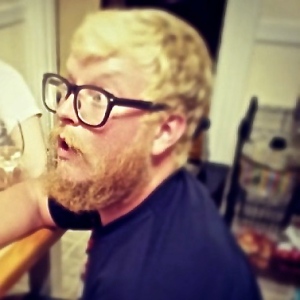 If you live in the St. Louis area, you may have seen this guest’s face on a lamp post, street sign or bathroom wall – in the form of a sticker… of his face. That’s right, folks, this guy has the audacity to plaster the metro area with his face. I wonder which nutrient you have to be deficient in to be so full of hubris. I mean, who does this guy think he is? Someone hilarious? Someone whose presence is desired all over the city? Someone awesomely thoughtful and smart!? Well, he’s right.

What is your name?
Bryan Michael Fornachon

How long have you been a non-vegan?
29 years and 9 months

Why have you decided not to be vegan? Describe your journey to veganism and where you got stalled.
I come from a long line of Meaters. It’s in my blood. Growing up, I was never into vegetables. My mother was always good at trickery. A wizard of the hidden broccoli. I guess enough CheeseWhiz could mystify just about anyone, though, right? 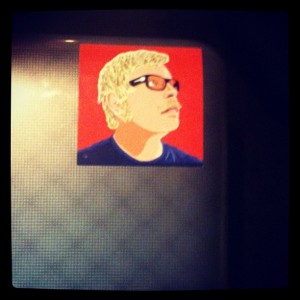 I did become a pescetarian for a solid six months. I had no idea what I was doing. Cheese pizza, grilled cheese sandwiches, fish sticks, cheese, just… Things were going, uh, well. It all came crashing down on one fateful afternoon. One bite is all it took. I had gone to QuikTrip and purchased, what I thought was, a delicious pepperjack cheese taquito. I smiled and giggled all the way from checkout to the driver’s seat with the anticipation of a young boy receiving his very own puppy. Finally, it was mine. All mine. I held up the golden tube of excellence to admire it for a moment, before it made its fantastic voyage to the center of my girth. Inch by inch, seemingly in slow motion, I lowered it to my quivering lips. The aroma was intoxicating… euphoric. I closed my mouth around it. My teeth mashed through the crispy shell with little effort. Heaven quickly turned to Hell. A collision of emotions that rivaled The Big Bang tore through me. “What is this?!” I thought. It was not the warm, gooey ecstasy of perfectly heat rolled bliss. No, it was a be… *choking back tears* A BEEF TAQUITO!!!! and I liked it. So, I started eating meat again.

Where do you get your protein?
Sandwiches and pizza… duh.

As a non-vegan, list some ways you try to impose your beliefs onto others.
I try not to impose. None of my business.

Do you eat fish? You eat fish, right?
Only in stick or taco form…

Are there any animals in your life, such as pets or funny neighborhood squirrels? Tell us a story about them.
I have my Geoffrey. My confidant. My best friend, and my advisor. He turned 9 years old on May 21st. He’s like a crazy grandpa. He sleeps in the weirdest places, farts, groans and moans, and all his joints pop when he stretches. He once chased some kids off the lawn while wearing only a pair of his tighty whities. Crazy Grandpa Geoff.

What do you do for fun besides eating meat and dairy?
I dabble in making films, sketch comedy, and improv.
On occasion, I go to used bookstores and buy outdated physics and science literature to, you know, keep up on time travel.

The person who nominated you for this interview describe you as someone who “can be funny.” Prove it.
No.

Do you have any upcoming projects you want to plug? Tell us about them.
Coming up in July, Storyteller Improv will be a regular Saturday show at The Improv Shop! Pretty super excited about that. Check check check it out!

Make up a question of your own and answer it.
Bryan, if you had an inexhaustible income, what would you do with it?
I’m glad you asked, Bryan. I would be the Guinness World Record holder for the longest Auntie Anne’s receipt. Legitimately.