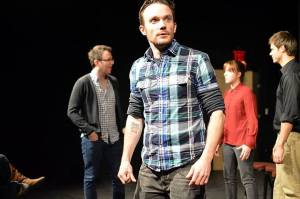 This interviewee is a rare breed. He’s the best of both worlds in almost every aspect. He’s fun and lively in groups, and he’s interesting and engaging in one-on-one conversations. He works out, and he’s a video game dorkus. He is a high-powered improv Godfather in St. Louis, and yet he’s incredibly humble.

In fact, now that I think of it, he’s suspiciously humble. There must be something really, really wrong with him. Something that might come up in this interview about veganism. Oh, no…

What is your name?
Hi, I’m Andy Sloey!

How long have you been a non-vegan?
Like, forever!

Why have you decided not to be vegan? Describe your journey to veganism and where you got stalled.
I’m so busy most of the time that my options at mealtime are usually whatever’s in the convenience store at Mobil. Most of these times I default to nuts, which I’m pretty sure are super vegan. On the nights I cook for my kids (I have two children! Ian is 10 and Ella is 5), I’m more concerned with just getting something onto the table that they will eat. So yeah. I’m busy and an unskilled/untalented chef. One time I made chicken patty Parmesan that the kids liked. I suppose I could have used vegan chicken patties. But I will absolutely not use vegan Parmesan cheese. Vegan cheese is gross.

Where do you get your protein?
As I alluded to in the previous question, I eat a lot of nuts. I’m pretty sure they are made of protein. I also eat protein bars, which I’m also pretty sure are made of protein, because of their name. If I do eat some kind of meat, I usually stick to chicken or turkey. Which I’m okay with. Birds are total jerks as a species, so why not eat them? Like, geese are complete dicks. So are cassowaries and ostriches. They used to be dinosaurs for chrissakes. I’m not a violent person, and I hesitate to type this, but if a goose was messing with me in a parking lot and I had a baseball bat, I can’t say that I wouldn’t knock him a good one in the head. I already feel bad about typing that. But it was me or him.

What vegan food do you fear you’re missing out on as a non-vegan?
My friend Melanie, who is vegan, made a sour cream out of like, nuts and some other stuff one time. We put it on bell pepper fajitas. That was pretty good. I think there was some lime in there. It was delish! But seriously, I could stand to eat more vegetables. Upon typing that I realized that I don’t know how to spell vegetables. That’s how rarely I eat them. I make my kids eat fruits and vegetables though. Sometimes I worry that I’m coming down with scurvy. Do people just come down with scurvy anymore? What are the symptoms? Isn’t your husband a doctor? I need an appointment for my scurvy.

Do you eat fish? You eat fish, right?
Not regularly. I like sushi and fish tacos, though.

Are there any animals in your life, such as pets or funny neighborhood squirrels? Tell us a story about them.
Naw. My apartment is currently too small to house any pets. I really want to get a dog though. When I get a bigger apartment, maybe! I can tell you about the dog I would get: He would be a little Aislinge Bray Terrier, and I would name him something regal and car related, like Bentley, Aston, Royce, Maybach or Cutlass Supreme. We would play for all day and he would sleep with me or the kids. Hopefully he would trade off nights with the kids so they wouldn’t become upset with him for favoring one of them over the other. To the right is a picture that I found on the internet.

What do you do for fun besides eating meat and dairy?
As I said, I have two kids, Ian and Ella, who keep me busy and happy. I also help run an improv theater in St. Louis, MO, called The Improv Shop, so that takes up a lot of my time. I force Melanie to watch me play video games sometimes; she’s okay with it. I love video games. My buddy David and I are WAY into this Star Wars Miniatures game right now, which is also cool. At the Improv Shop I coach a team called Burgerson, and they are great.

Do you have any upcoming projects you want to plug? Tell us about them.
www.theimprovshop.com

Make up a question of your own and answer it.
If you had to make a list of your top 5 favorite video games of all time, right now, off the top of your head, what would they be?
Oh man, let’s see. My top 5, right now, without a lot of thought, off the top of my head, in no particular order are: RC Pro-AM for the NES, Super Mario World for the SNES, Final Fantasy IV (released as Final Fantasy II outside Japan) for the SNES, the entire Battlefield series for various systems, and System Shock 2 with its spiritual successors. Honorable mention would go to the Halo Series and this one time I was able to get like 10 friends into the same Halo 3 match. Also the time my three best gaming buddies and I became Halo 3 Vidmasters, got our Recon Armor, and then took a picture of ourselves doing sweet Warthog jumps in Valhalla while wearing it:

One thought on “Interview: Andy Sloey Might Have Scurvy”