I met this week’s interviewee at the first meeting of The Last Sketch Comedy Show on Earth, a sketch group we were both a part of in St. Louis, and I have adored him ever since. He is a master of creativity and artistic skill, always designing set pieces for us with markers and cardboard – everything from a vase with flowers in it to a desk sign for the DoomsDay News segment. I’m not even sure what to say about Bobby that will do his awesomeness justice. He’s considerate, humble, intelligent, hilarious… And seriously, his creativity is unparalleled. I mean it. He’s so creative! He even makes up words. Like “pescatarian.”

What is your name?
Bobby McCosky

How long have you been a non-vegan?
I’m pescatarian. I have days where I eat all vegan, though I don’t practice it. So, honestly, about 29.925 years.

Why have you decided not to be vegan?
I’d like to say some hippie dippy thing about believing in doing all things in moderation but the real answer is cheese. I just love cheese.

Where do you get your protein?
Beans, tofu, occasionally fish.

Since you’re not vegan, does that mean you also fit stereotypes like that you drive a Hummer, love football and don’t think for yourself?
No, but I fit into a bunch of pescatarian stereotypes. I have a beard, thick glasses, and I say things like, “Um, I guess because fish have a short term memory or something? I don’t know. I just do, alright?”

What vegan food do you fear you’re missing out on as a non-vegan?
I do eat a decent amount of vegan dishes thanks to the cooking books of Isa Chandra Moskowitz, but I have to say that I have never had good tempeh. It always tastes like a weird nutty, falling apart, dehydrated yet somehow soggy granola bar. Like, I bet there is good tempeh out there, but I have given up trying to make/use it in my cooking. 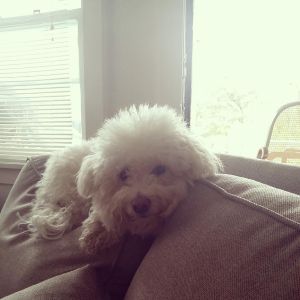 Are there any animals in your life, such as pets or funny neighborhood squirrels? Tell us a story about them.
I have a five-year-old Bichon Frise named Pablo. He is pretty much my everything, best bud, A #1, top choice everything. A little fluffy white cloud of cuteness and curiosity. Anywho, one day I was walking him and this nice old lady asked if she could pet him. I said of course, he’s super friendly. She asked me what his name was and I said “Pablo,” but apparently she heard, “Rob Lowe.” From that moment forward, I have pretty much been questioning all my life choices and wondering why I can’t live up to the greatness of others.

What do you do for fun besides desperately searching for justifications for not being vegan?
I do a lot of improv stuff in Kansas City. I am on a team called Disappointing Birthday Party as well as a Harold team called Babies. I recently became a member of the Recess Players, who do/teach long form improv, make sketches, do live shows on e-mprov.com, and put on great shows all around these parts. When I’m not caught up with that, I love to do animation, play music, listen to music, or mostly just hang out with my lovely significant other and make good food before whatever tv show we’re obsessed with comes on.

Do you have any projects you want to plug?
Yes! My Harold team Babies will be doing a couple shows on E-mprov.com on July 6th & 13th. You can watch them live or after the fact. Besides that you can check out www.recessplayers.com and follow me on twitter at @bobbymccosky . Oh! and if you’re in NYC for the Del Close Marathon, go see Lady Light Show on Saturday, June 28th, at the UCB Beast theater, and keep an eye out for this guy that entire festival! I’ll be creeping.

Make up a question of your own and answer it.
Bobby, if there is a heaven, what would you do if dogs aren’t allowed in it?
Well Bobby, I’d march up right to the gates with Pablo by my side, I’d tip my glasses ever so slightly down along with my brow and I’d look St. Peter right in the eye for as long as I could. Then, just when he’s about to speak, I’d say, “I’m Presbyterian. I didn’t think you were part of my mythology.”