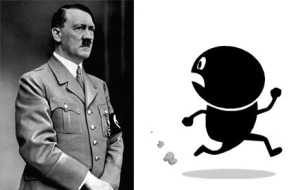 In developing this website, I’ve found that there are actually quite a few people who aren’t vegan. Weird, I know! Most of these folks are thoughtful, compassionate and great critical thinkers, so the only reason for them not to be vegan must be a lack of information. For these people, I decided to include some tips on how to be vegan, so they can get started right away.

“How to Be Vegan” Tip 9: Start Distancing Yourself from Hitler Right Now

Of all the incredibly logical and fact-based objections to eating vegetables, the best is that Hitler was a vegetarian, and thus being a vegetarian is bad news. The argument looks like this:

It’s irrefutable, and it stumps us vegans every time it is brought up. This very valid evidence – nay, proof – of the wrongness of vegetarianism (and surely veganism) is called an “ad hominem” attack. And it’s the strongest of all the arguments against not eating animals.

Why is this Important?
Since there is no way to go up against this seamless argument, all we can do – what we must do – is distance ourselves from Hitler. Right now.

How do we do it?
There are many ways to distance yourself – a modern-day person whose decisions are based on compassion for all beings – from Hitler – the long-dead dictator of the Nazi Party and perpetrator of the Holocaust. I know, it sounds iffy; but trust me, it can be done. Here are some examples of things I have done, that may work for you as well:

What are the Rewards?

What are the Challenges?

One thought on “Tip 9: Start Distancing Yourself from Hitler Right Now”