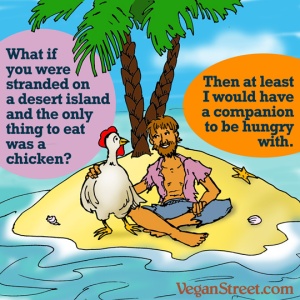 When you first start exploring a move toward veganism, you’ll find that a lot of your friends and family will suddenly have a great interest in your health and well-being. How nice!

People who stayed up all night with you, eating chips and salsa and throwing back beers like there was no tomorrow, will suddenly be worried that you will lack protein if you eat too many vegetables. People who have never before expressed concern about your shoes, belts and shampoos, will begin to chime in about them, to help you out and lovingly guide you toward your goal of being less cruel to animals. Aren’t you lucky?!

Even your coworkers, acquaintances, distant cousins and strangers on the internet will help you reach your goal by posing thought-provoking questions that you may have never thought of but that will surely come up now that you’re eating kale. Heed their advice and warnings, because you could, very possibly, get – for example – stranded on a deserted island with only a chicken to eat.

Can you imagine?! Getting stuck on a deserted island and only having a live, sentient, interested-in-living chicken to nourish yourself?! That would be a disaster for your veganism. Not to mention for the chicken. I mean, you would have to eat that chicken. There would be no other way to survive. And please don’t ask me to explain how the chicken has survived on this deserted island void of plant foods. That’s not the point.

Why is this Important?
If you’re going to be a vegan, you’re going to have to think about the horrible and very probable situations you’ll get into. Getting stranded on a deserted island is just one of them, but it’s the most likely one, so it’s what we’ll focus on here.

If you only have a chicken to eat (no grass, no seeds, no berries, no nothin’), you’re going to have to eat him. And then you won’t be vegan anymore. And then, good job, you’ve proven to everyone that being vegan is impossible. Way to go, dummy.

How Do We Avoid It?
Since I’ve never been trapped on a deserted island, I feel I can speak with authority. Here are some ways I avoid getting stuck on an island and having to eat a chicken:

It may seem simple but you’d be surprised. While I don’t personally know any vegans who have gotten stranded on deserted islands with only an animal to eat, I have heard a lot about it from non-vegans who are trying to help us think through real, important situations, NOT trying to derail the conversation away from whether or not it’s ethical to kill and eat animals when we don’t have to.

What are the Rewards?

What are the Challenges?

In developing this website, I’ve found that there are actually quite a few people who aren’t vegan. Weird, I know! Most of these folks are thoughtful, compassionate and great critical thinkers, so the only reason for them not to be vegan must be a lack of information. For these people, I decided to include some tips on how to be vegan, so they can get started right away.

2 thoughts on “Tip 16: Listen to Your Supporters and Don’t Get Stuck on a Deserted Island”