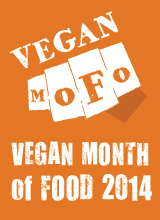 Posted as part of VeganMoFo (The Vegan Month of Food) 2014 When vegans are around, things get a little tricky – for all of us. Sometimes non-vegans get defensive or hostile because they think vegans are telling them their food choices are unethical. Sometimes vegans are! And that comes across as self-righteous and snobby.

So, I’m using the Vegan Month of Food – a month during which vegan blogs are celebrated and aggregated in one place – to provide some easy tips for non-vegans and vegans to use, so we can all get along a little better. As the old saying goes, “If you can’t say anything vegan, don’t say anything at all.”

Why?
I know, I know. I’ve complained about this before. But last time, I was telling non-vegans to stop confusing gluten free people with vegans. This time, I’m asking vegans (who don’t actually have Celiac) to stop aiding and abetting non-vegans’ confusion by lumping these two things together. Veganism is different and separate from not eating GMO foods, non-organic foods, non-local foods, cooked foods and foods that contain gluten. Veganism and gluten free eating have nothing to do with each other. Nothing.

Furthermore (which feels like a word that’s too official sounding to be used in such a snarky blog post), when you don’t have Celiac and you tell people you “can’t eat gluten,” you’re kind of ruining it for people who actually have Celiac and actually can’t eat gluten. People end up lumping this trendy diet in with the actual medical condition of Celiac, and then they’re less careful with people who ask for gluten free options. So quit it.

The only vegan-aligned reason for not eating gluten would be if said gluten was harmful to animals. And it’s not. Unless those animals have Celiac.

Note: I asked you to choose my punishment for missing a day of posting for VeganMoFo, and you responded. But there was a tie, so I decided to do a few of the things: including posting a dumb picture of a (smart) vegan on each VeganMoFo post. Here’s today’s! 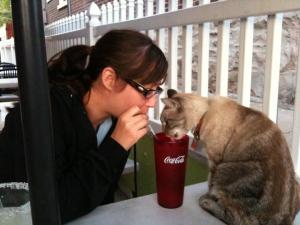 Vegans are so kind and gross, as evidenced by my friend Jess sharing her drink with a cat. Ew and aw!