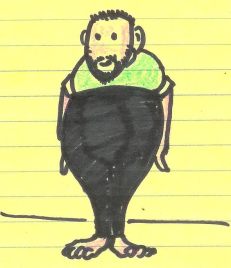 I must admit: I am a little nervous about it, because they both have my email address now, which contains my first and last name. With a quick Google search, they could probably find out where I live, where I work and where I go to get great seitan wings and vegan milkshakes. … Tell my parents I’m sorry.

What is your name?
Neil Baker

How long have you been a non-vegan?
47 years

Why have you decided not to be vegan?
I was raised in a non-vegan household and therefore indoctrinated (some might say brainwashed) into the non-vegan way of life. Even though I sometimes doubt my non-vegan beliefs, I still practice them.

Where do you get your protein?
From meat, eggs and other protein-rich foods. No nuts allowed in the house though, as my son is allergic.

If you were trapped on a deserted island and all there was to eat was broccoli and kale, would you eat them?
Yes, I love all vegetables. That said, if there was only celery available, I would first try to fashion a raft from it, and if that didn’t work, I would sharpen a celery stalk and end my life right there and then.

What vegan food do you fear you’re missing out on as a non-vegan?
I’m sure somebody, somewhere once accidentally made a really tasty bit of tofu. I would have liked to try that.

Do you eat fish? You eat fish, right?
Farmed Tilapia and salmon.

Are there any animals in your life, such as pets or funny neighborhood squirrels? Tell us a story about them.
No pets; I’m not a fan of people owning animals. The squirrels in this neighborhood keep leaving peanut shells on our back deck. They are trying to kill my son. I have included a picture of an evil squirrel.

Do you have any upcoming projects you want to plug?
Why yes! My publishing company, April Moon Books, has two upcoming books coming out later this year: The Dark Rites of Cthulhu and AMOK!, a couple of horror anthologies that even a vegan would enjoy.

Make up a question of your own and answer it.
Is there a god (or gods)? Hell no, that’s just silly. I have a supreme lack of confidence in dangerous human constructs such as religion, materialism and rope bridges.

One thought on “Interview: Neil Baker”