Well, that was a nice little vacation, wasn’t it? We’re back now, and better than ever. There are plans for some video and other interesting projects in the near future, but for today, we talk with one of the kindest, loveliest people on the planet, Marshall Cox. I met Marshall at the first meeting of what became The Last Sketch Comedy Show on Earth in St. Louis. My first impression (ugh, another hipster) very quickly evolved into feeling super lucky that I get to be his friend.

What is your name?
Marshall Cox

How long have you been a non-vegan?
Since I started eating solid food. I think. I’m sure I got something from the food my mom ate while pregnant with me.

Why have you decided not to be vegan?
I’m sure it has more to do with how I was brought up than any actual conscious decision. But there’s also the fact that if I stopped eating meat there would be at least two pounds of meat per week being packaged for nothing. Not to mention eggs and cheese. And I’m nothing if not economical.

Describe your journey to veganism and where you got stalled.
I was young and lazy. It pretty much started there. When I was five, my parents were in their mid twenties and broke. McDonald’s is easier than cooking and I just got used to that.

Where do you get your protein?
Eggs, probably. There’s protein in eggs, right? And fish?

What vegan food do you fear you’re missing out on as a non-vegan?
Really boring, hard pastries.

Do you eat fish? You eat fish, right?
I do eat fish. But I live in the Midwest so I don’t eat fresh fish. I’ll pretty much eat anything that’s not canned tuna. 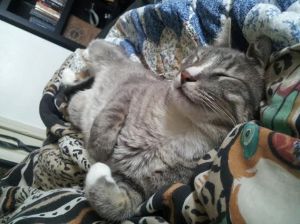 Are there any animals in your life, such as pets or funny neighborhood squirrels? Tell us a story about them.
Well, there are a few. There’s my cat, Ford. He just wandered into the garage one day and started hanging out. He was only a few weeks old and alone so I started feeding him. And then he just started coming into the house. Now he’s part of the family. He’s an outside cat who acts like a dog.
Then there’s my girlfriend Ashley’s cats, Kreacher and Wulfric. They’re indoor cats who beg nightly to be let out. Luckily they don’t live with Ford, or Ashley and I would have a lot of explaining to do. (And I don’t believe, “Because I said so” is an answer.)

What do you do for fun besides eating meat and dairy?
Video games, movies, improv. And any other thing that catches my eye. (I have a problem with focusing. I just get distracted by any

Do you have any upcoming projects you want to plug? Tell us about them.
Well, I’m on a Harold team (Galaxander) that performs on select Thursdays and Fridays at the Improv Shop (510 N. Euclid) in St. Louis. I’ve also just begun coaching one of our newest Harold teams (Billy Pilgrim). People can check that out. That’s about it for now. I’m learning to say no.

Make up a question of your own and answer it.
Who do you think rocks harder? Kid Rock or Limp Bizkit?
No.

One thought on “Interview: Marshall Cox”