I wish everyone had an Ashley Schnepf in their life. One time she sent me a package full of trinkets and things, and she included about ten tiny cards in tiny envelopes that explained each item. One item was a cassette player! And yes, there was also a cassette! Another time, Ashley and I agreed to be digital pen pals, and she wrote me a letter – a real letter – and then took a digital photo of it and Facebook messaged it to me. It was utter brilliance. Not to be confused with udder brilliance, which in my opinion means you leave the cow’s udders alone and let her calf have the milk instead of stealing it and making her baby into veal. You monsters.

The “eyes closed” part of the title is a metaphor. The “doors open” part is not. I’ll let her explain.

How long have you been a non-vegan?
For about 4 years. and then one other time for about 20 years before that.

Why have you decided not to be vegan? Describe your journey to veganism, how you’ve come so close but then got stalled.
My non-veganism is kind of a long story. I grew up non-vegan (We just went to mass on Sundays and Christmas). Then, when I was 19, I met a pretty cute boy. He had recently converted to veganism. He was very charismatic and I was young and impressionable. That’s when I became a vegan. I practiced religiously for about 3 years, and then me and said boy broke up. I went through a lot of crazy changes during that breakup. I pierced my nose, I got a bunch of tattoos, I shaved my head, and I stopped being vegan.

And here we are today…

Where do you get your fiber?
Um… I eat green things pretty frequently. Those have fiber, right? I really like Grape Nuts. I feel like those gotta have something. And sometimes, when I’m feeling like I should… get my shit together… I’ll buy a box of granola bars with the word FIBER printed across the front.

Which fad diet or non-vegan celebrity or picky-eater boyfriend named Marshall Cox has pressured you into not being vegan?
Marshall is a VERY picky eater, but he has never pressured me into eating what he eats. Usually whatever he is eating has very simple cooking instructions, leaving me a lot more time to read books.

What vegan food do you fear you’re missing out on as a non-vegan?
So, I think because I was vegan for a while, I kind of know what I’m missing out on. I do miss some of it sometimes, but for some reason that never really convinces me to try it again. I used to make this bad ass vegan mac-n-”cheese”. I’ll have to make it for you sometime. I’m amazed by the things you can do with nutritional yeast!

Do you eat fish? You eat fish, right? In secret maybe?
I do. It’s no secret. 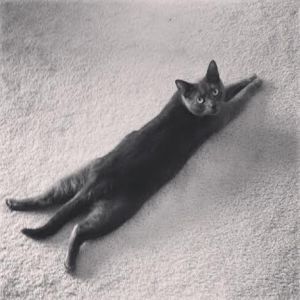 Are there any animals in your life, such as pets or funny neighborhood squirrels? Tell us a story about them.
I have a cat named Kreacher. She is weird. She doesn’t like to cuddle, and she is REALLY uptight. She also HATES closed doors; so getting to sleep at night is always kind of a process. I have to make sure the closet door and the bathroom door are both open, and then I have to prop the door to my bedroom open just enough so she can get in and out throughout the night. But she’s mine, and I love that about her.

What do you do for fun besides eating meat and dairy?
I mostly just read books. I started a book “blog” on Instagram. I thought the idea of short entries would get the word out but also appeal to this generation’s fleeting attention span. I’m realizing that the book community on Instagram is mostly a bunch of 13-year-old girls who have nothing but time to read because they don’t have boyfriends or jobs to keep up with. It’s been an interesting journey, to say the least.

Do you have any upcoming projects you want to plug? Tell us about them.
I guess that Instagram thing… @artifact_books. I really like getting book suggestions, and I really like hearing about what my friends are reading. So, if for nothing else, follow me so you can rub your current reads in my face.

Make up a question of your own and answer it.
Who’s your favorite member of O-Town?
Ashley Angel, of course. As a young girl, I thought it would be fun for us to get married so we could never tell our mail apart.

Cook the noodles.
In a separate pan, mix all other ingredients except the last two together until the schneeze melts, then add flour and soy milk. Mix. Bring to boil.
Optionally, add tomatoes and then bake in the oven until it gets crispy at the top.